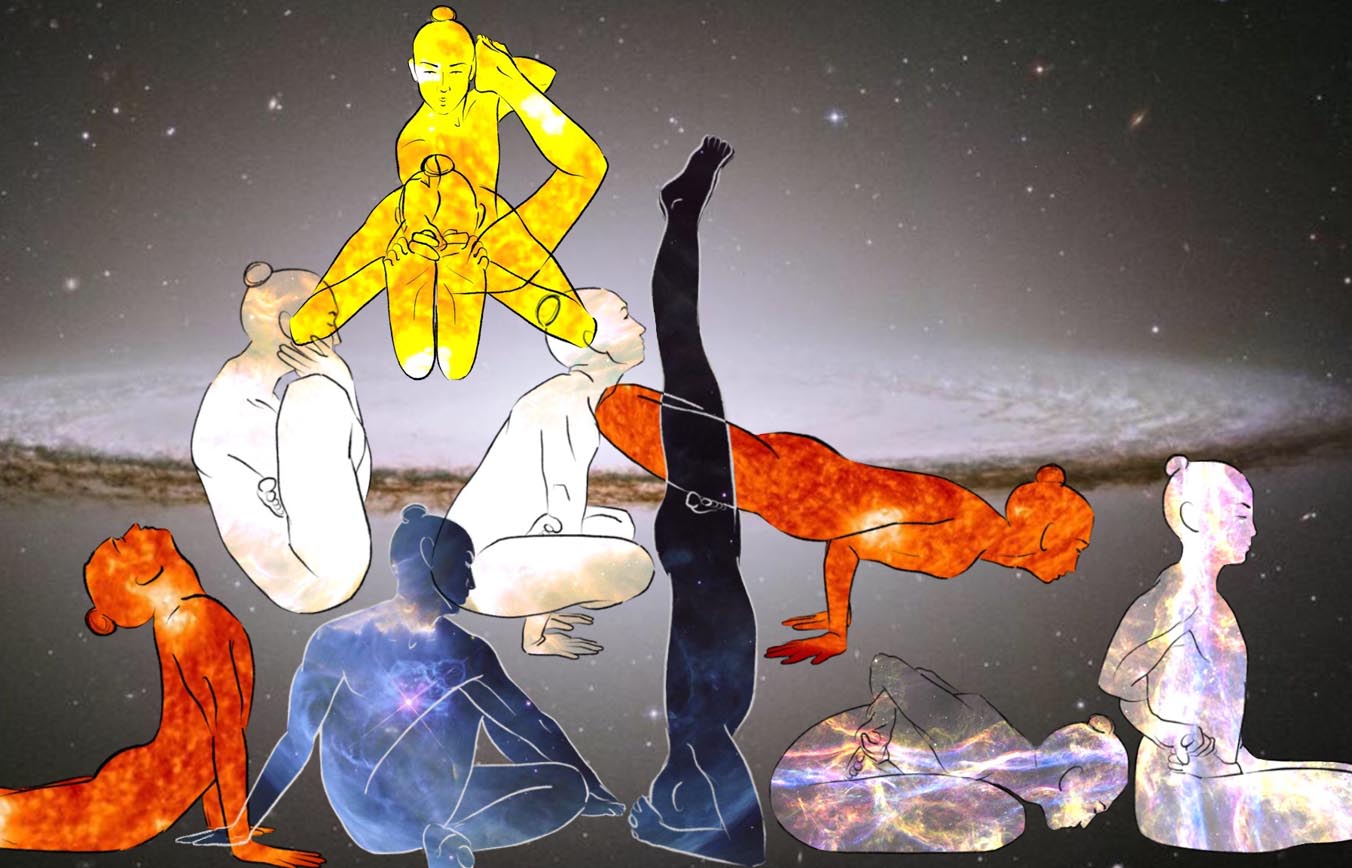 The first limb of Hatha yoga is Asana and is classified as bahiranga sadhana (external practice). Though Asana means ‘seat’ or ‘to sit’, it also has a dynamic aspect. Before one is able to sit in a light and unobstructed manner for prolonged periods of time, one must first practice dynamically to overcome the restrictive patterns that have arisen in previous stages of life.

– Pashupata Sutras, Commentary on Chapter One.

This verse suggests that a change in mindset is crucial since one cannot embark on the path of yoga with the mindset that served a completely different state of affairs. There is also an implication that a method exists that will enable a smooth changeover of these mindsets without disruption. This method is Sankalpa (lit. the will of determination) and when this is correctly implemented, a spontaneous flow of the divine desire floods the entire system. It is through this will of determination that the mind is harnessed and both mind and body brought under control.

Sankalpa usually follows a short prayer paying homage to the Guru and a plea for safety during and after sadhana – its full title is Sankalpa Mudra and Nyasa. Mudra and nyasa are hand and finger gestures utilised in touching the energetic sites on the body while mentally going through the different layers of energetic paths and sites within. This process (kriya) takes between 15 and 20 minutes, usually concludes with a healing mantra uttered 27 times, and leads into the practice of asanas.

Sankalpa is a powerful tool that demands of the mind that it remain concentrated and alert within the energetic fields of the body complex. The method of Sankalpa is imparted to a student when he or she is mature enough to start working with it. It is inappropriate while the student is still rough and their practice mechanical.  Sankalpa is never given but must be earned. The content of Sankalpa varies from lineage to lineage according to geographical and cultural differences.

The dynamic asanas develop the skills necessary to govern the energetic fields of the mind/body complex. Additional benefits include the restoration of the body’s health, the gaining of flexibility, lightness of structure, an unobstructed flow of the life force as well as strength and endurance. These accomplishments are also important in preparing the individual for the internal practices (pranayama, bandhas-kriyas-mudras et al). The most important matter during this process is that one does not confuse these auxiliary benefits with the goal.  The goal is achieving the final state of yoga, freedom through enlightenment.

The development of the right skills for the un-imposed control of the mind-body complex through the will of determination is the goal of Bahiranga Sadhana. Impatience is the biggest pitfall on the way of yogic sadhana. One must work with patience and consistency and without break, never exceeding ones natural capacity. The asanas are of many different kinds and types including squatting, standing, sitting, lying down, face up, face down, sideways, head down, turning, twisting, jumping, pumping and weighing. However one should not focus on mastering hundreds of asanas. Indeed the oldest texts on Hatha yoga give very few asanas to practice. This is because each asana has mild, medium and intense variations and those that are knowledgable utilise them appropriately. For instance forward and backward bendings must be stabilised with balancing asanas to overcome the one-sidedness of those positions. The dynamic asanas conclude with supine positions like supta trivikramasana and anantasana followed by the inverted positions.

The beginner always starts with a fixed arrangement of dynamic asanas which may be termed Angahara (arrangement), Vinyasa Krama (step by step placement) or Sukshma Vyayamas (subtle restraining drills). These sequences range from primary through intermediate to intense (or advanced). These systematic courses carry the hidden message that one must not attempt to go beyond ones limit. It is wise if one stops at the asana which is not accessible and does not go further until one has gained mastery over it. These systems vary from master to master so it is vital that one stays where one has begun and sees it through. ‘Shopping around’ will only cause confusion and produce a jack-of-all-trades and master of none.

Advanced practitioners who have mastered the different levels of intensity, no longer need fixed sequences. They create their own based upon the needs and requirements of the time. Until they are able to function in this free manner they have not mastered the craft of the dynamic practices; all they have gained is a partial ability.  When mastery is complete, a feeling of revulsion arises with regard to fixed patterns. This is the sign that one is ready for the practices of pranayama which must be conducted at sunrise, noon, sunset and midnight if one is to make progress towards samadhi, the equanimous state beyond the mind-body complex.

The Sanskrit term Kalitasanam, refers to a formed seat. This seat has been formed by what has preceded it. Since it is formed, karana (cause) and karya (effect) are united in it. Since it is formed one may rest (aste) in it. Thus the yogin with his own will and by his own power governs (adhyaste) the effect which is in his/her power.

Mastery of the dynamic sphere opens the gate to the unknown mysteries of mind/body function. Beyond this gate is Antaranga Sadhana, the internal cultivation of the life wind. Here one encounters the hidden aspects of fear, anger, aggression, dependence, heart rate increase/decrease, addiction, submission, and flight. The currents of the life wind  must be purged of these emotional ailments by Nadi Suddhi Pranayama.

Guru Goraknath in his Shatakam, and his guru Matsyendranath in his Samhita, only give one asana for pranayama – Baddha padmasana (bound lotus posture). Nadi Suddhi pranayama is alternate nostril breathing. Here is some food for thought.

The static asanas will be discussed in detail in the next article which deals with pranayama.

Close by: Remember to call ahead for visit conditions

Roche de Solutré: Not to miss, on the Great Site of France Solutré Pouilly Vergisson

Château De Pierreclos: In the midst of organic vineyards.

Chateau De Berze-Le-Chatel: Historical monument, one of the most well-preserved medieval fortified castles of Burgundy (where Ridley Scott shot ‘The Last Duel’!)

Chapelle Des Moines: In Berzé-la-Ville (the next village!)  – not to be missed.

Grottes D’azé: Earth under life: in -350 000, a primal man appeared in the cave, then rhinos and antique elephants…the prehistorical cave and the underground river hide one of the largest European cave bears fields.

Château De Saint-Point-Lamartine: If one appreciates the writer

Cité- Abbaye De Cluny: The Benedictin Abbaye Of Cluny Shined On The Whole Middle Age Europe, Being The Widest Of Western Christianity Before The Building Of Saint-Peters In Rome.